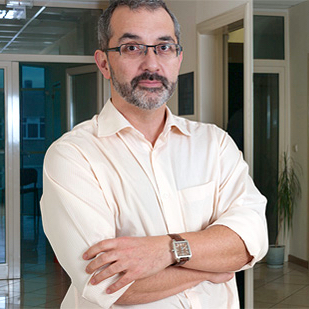 Atanas Kiryakov is founder and CEO of Ontotext – leading vendor of semantic graph databases and text-analytics. Kiryakov is member of the boards of Sirma Group Holding and the Linked Data Benchmarking Council – association of the graph database vendors, including ORACLE, IBM, Neo Technology, Ontotext and others.
Atanas Kiryakov is a leading expert in semantic databases, author of multiple signature industry publications, including chapters from the widely acclaimed “Handbook of Semantic Web Technologies”. Kiryakov obtained his M.Sc. degree in CS from the Sofia University, Bulgaria, in 1995 with a thesis in AI. Atanas is author of more than 20 scientific publications with more than 3000 citations in reasoning, semantic databases, search, text-mining and linked data management.
Atanas started his career as software engineer in 1989, when he was last grade in the Sofia High School of Mathematics. Kiryakov joined Sirma (the biggest Bulgarian software house) as a software engineer in 1993 and later on became partner. In 2000 he found Ontotext as semantic technology R&D lab in Sirma Group. In 2008 Kiryakov finalized an investment deal for Ontotext with VC fund NEVEQ.